I bought a Pinebook Pro way back in November of 2019. For those who don’t know, the Pinebook Pro is an ARM64 laptop made by Pine64, a company that develops ARM64 devices and harnesses the open source software community to develop code that can drive the hardware. It’s a really interesting business model, allowing the company to focus on hardware that meets the needs of the community.

For a long time I had been keen to get an arm64 laptop. I had previously owned a couple of Odroid XU4 single-baord computers that functioned very well as a little linux box for doing basic work, but they always required an available monitor. A laptop was more convenient. For a long time, the only options were chromebook computers, which seemed to involved a lot of messing around to get Linux operating on. I bought a Teres laptop from Olimex and built it, but it was not really fast enough for my work and I had battery problems with it.  So when Pine64 announced the development of a USD199 laptop with an ARM64 processor that was designed to run Linux, and that promised a thin form factor, 4 GB RAM and 64 or 128 GB EMMC storage, I was interested.

I have been using the device for about 8 months now. As an early adopter, I had the usual problems one might expext with an ARM-based linux: the trackpad was inaccurate, the device would not sleep properly, problems with wifi etc. Eventually the trackpad problems were helped by a firmware update. This was great, because the trackpad was nearly unuseable. My biggest problem was that my config files were kept on an owncloud server that was newer than the Debian version for the pineboook I was using, so I could not access these files, which were essential for my workflow. I transitioned from Debian to Manjaro, and the rolling updates solved that problem. The Manjaro folks seem to have really taken to this device, and the OS seems to work well. Figure 1 shows what the login screen looks like.

The device is plain black, with magnesium top and bottom surfaces.  The bezel and palmrest parts are plastic (more on this below).  It’s very light and the hinge is a little stiff, but holds the screen in place well. I personally like the fact that there is no logo, other than the pine logo on one of the keys that operates in place of a Windows key on a windows laptop.

Currently I am using the xfce version of Manjaro, with the i3 window manager, and I really like this combination. The regular updates get rid of many of the software problems, and about the only thing I would like would be better power consumption in sleep mode. Leaving the machine overnight in sleep mode still consumes about 70% of the battery power, which isn’t great. While working, though, I can get at least 7-8 hours use out of the device without resorting to any power reduction tricks. That’s good enough for my needs. 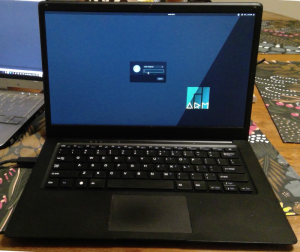 A couple of surprising things about this laptop: the keyboard and the screen. For $199, my expectations were certainly not high. But the screen is pretty good, with clarity and nice resolution. Also, despite the wacgrning you get when you order one of these, there were no broken pixels on it. The screen is better than the elitebooks I have used in the past, which were a lot more expensive. The keyboard is surprisingly good also, for a chiclet keyboard. It’s not a thinkpad, but it’s a lot better than a lot of other chiclet keyboards I have used, or the keyboard on my Surface Pro 4.

The wireless is not strong, but it’s OK. The bluetooth also works as well as it ever does, at least for my bluetooth headphones, and the connection struggles at times if the CPU is being used for other tasks.  The device has USB A and C ports, with the latter providing ethernet with the appropriate USB C dongle.  One other neat thing is that the wifi and camera can be turned off in hardware with some key combinations.  For those with privacy concerns, this is useful.

There are some other problematic aspects of the Pinebook Pro. Even with the firmware update, the trackpad is not very good. It’s useable, but that’s about it. The speakers are poor, and are directed under the device. But the biggest problem is the structural integrity of the device itself. The plastic is thin and brittle, and after only about a month of gentle use, cracks started to form on the wrist rests, plastic started to break around the USB ports, and eventually the plastic around the trackpad, the power barrel, and near the hinges broke from the stresses generated when the cover was opened and closed. I had the ISO keyboard. Initially I superglued the cracks and sanded the case down, which helped with some of the problems, but they got worse and worse. Figure 2 shows the damage to my keyboard, with the cracks at the power port causing problems with opening the case. If you look carefully, there are some lighter lines at the bottom left that indicate where the superglue repairs were done.  Eventually I had to buy a replacement ANSI keyboard that I installed (with firmware update) because I read on the forum that it was a better quality plastic than the plastic on the original ISO keyboard. That remains to be seen: it does not look any different to me. I suspect that I’ll have to get another keyboard in the future. The magnesium bottom and lid parts seem quite resiliant. To replace the keyboard you have to replace every board and cable on the computer, as they are screwed to the keyboard. However, I managed it, so it cannot be too hard (remember to peel the plastic from the keyboard connector). I think the physical strength of the palmrest part of the keyboard is probably the single biggest problem with this device.

One other problem for users outside the USA is that they won’t send you a replacement battery.  I suppose when the time comes I’ll need to get one from another supplier and get the wiring right.  The problem with computer batteries needing to be sent inside a computer for overseas shipping seems to me to be a cop-out.  If we are to take e-waste seriously, users should be able to easily upgrade all the components of their device, and the batteries in particular, as even rechargeable batteries are consumables.  One of the best aspects of the Pinebook Pro is that components can easily be removed for replacement and upgrade.

So the question I set out to answer is ‘Can the Pinebook Pro be a useful everyday computing device?’ For me, the answer is yes. For you, it may not be. It’s not a fast machine, by any means. The Surface Pro i5 runs rings around it, for example. But my needs for a computer are pretty simple. It runs Emacs, Firefox, GIMP and Inkscape well, and internet video is reasonably fast and smooth enough for YouTube. The delay is noticeable in CPU-heavy activities like compilation, but it’s not that bad. In fact, using the i3 window manager, it’s pretty zippy for the most part, with easy keyboard-based swapping between workspaces. I really like i3, and have it configured to easily provide the programs that I use on a day-to-day basis.  Like all ARM64 devices, linux applications are not as well catered for as they are for Intel CPUs, but this situation will get better with time, in particular thanks to the popularity of single-board ARM computers like the Raspberry Pi.  Despite this limitation, I’m able to do all the programming and text development needed for my scientific work on this device. I wouldn’t recommend doing CAD or playing graphical games on it, but for the text-based tasks I use linux for, it works well enough for my needs, and I really love the long battery life.  My Surface Pro lasts about 1 hour on battery after 4 years of use, and it’s nearly physically impossible to replace the battery.  In terms of hardware accessibility, the Pinebook Pro is great.

I would definitely recommend the Pinebook Pro to tinkerers like me. It’s not for those who are nervous about taking a screwdriver to their laptop, or for those who want their operating system to ‘just work’ out of the box. It is a simple and easy-to-disassemble computer.  I’ve been using it for serious work for about 6 months, and can see myself for continuing to do so, at least until the keyboard breaks again. I hope Pine64 keep improving the design and fabrication processes, developing a more robust machine that evolves with time.  I love the modular design, and the Manjaro community are doing a great job making linux work for it.  For USD199 (plus postage) this laptop’s not a bad deal at all.

This site outlines my thoughts on my areas of research (sensor design, laser diagnostics, high-speed flow) and experimental research methodology in general, computer programming, plus whatever else I’m interested in.

School of Engineering and IT